The kids finally arrive in Lilycove City, and Ash is starving. They decide to head to a restaurant that serves omelets, but Pikachu runs off, leading them to the berry market. In the berry market, they meet a Pokémon Coordinator named Kelly and her Grumpig. Kelly is buying berries to make PokéBlocks with, and she plans to enter the Lilycove Pokémon Contest. Kelly invites them to her home, which is attached to a PokéBlock store that her mother runs. Kelly’s mom teaches May and Brock how to make PokéBlocks in the Berry Blender.

Ash wants to teach Swellow the move Aerial Ace before his next Gym battle, so he ventures outside with Max to practice. They meet an old man named Ralph, who was once known as “Vladimir the Attacker,” a famous Pokémon Trainer. He offers to help.

May makes her first PokéBlocks and tests them on her Pokémon, but only Beautifly likes them. Team Rocket shows up and tries to steal Kelly’s Grumpig, but May has Combusken use Sky Uppercut to send them blasting off. After Kelly compliments the Fire- and Fighting-type Pokémon, May decides to use Combusken in the Lilycove Contest.

When Team Rocket finally hits the ground, Jessie finds a flyer for the contest and decides to enter with James’ Chimecho.

The contest begins, and May is called up first. She starts by having Combusken perform Fire Spin, but it goes out of control… 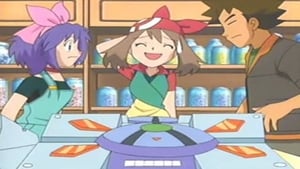