Cruisin' for a Losin'

The Rubello Pokémon Contest begins! Savannah is still nervous, but May is overconfident. Both of them do well in the first round performances, and while waiting in the locker room, May brags that once you have at least one ribbon, all the rest come easily. Drew tells her off.

Jessie tries to enter the contest by making her own ribbon, but instead a woman offers to buy the ribbon, giving Jessie the idea to start selling them. She puts James and Meowth to work.

The finalists in the contest are announced: May, Savannah, Drew, and Sunny. Ash tries to offer some advice, but May snaps at him.

Drew’s Masquerain takes down Sunny’s Girafarig with a three-move combo. The next battle is May’s Bulbasaur versus Savannah’s Lairon. Bulbasaur gets nervous, and doesn’t dodge Lairon’s attacks. Bulbasaur takes a bad pounding but May refuses to accept defeat, and the judges yell at her.

May goes outside, and Ash talks with her. The two of them go back inside to watch Savannah face off against Drew. Drew beats Savannah by a lot of points, and wins his fourth ribbon.

Team Rocket is trying to sell the ribbons they made, but no one buys one, and even the woman who bought one before wants to return hers.

Back at the Pokémon Center, Savannah doesn’t feel bad about losing, and even May realizes that she can’t take her wins for granted. 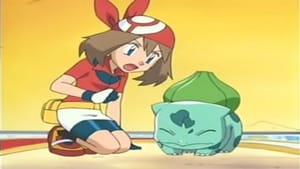