A Fan with a Plan!

May is headed for the Rubello Town Pokémon Contest, where at least one ribbon is needed to enter. She runs into Drew, and both of them are mobbed by the Mothers for Pokémon—a group of women who adore Pokémon Coordinators. One of them, Savannah, is a Coordinator herself, and will be competing in the upcoming contest, but she is really nervous.

Jessie from Team Rocket wants to enter the contest but can’t since she has never won a ribbon.

Later, May is practicing outside the Pokémon Center when she spots Drew with his new Masquerain. She tries to show off her Bulbasaur, but it won’t listen to her.

The next day, May is helping Savannah practice when they are accosted by Team Rocket, who takes both May’s and Savannah’s ribbons. The kids take down Team Rocket’s balloon, and Jessie returns the stolen ribbons. Savannah’s Lairon uses a Water-type move to send the thieves blasting off.

Savannah’s daughter Sandra reassures her mother, while May is feeling confident again about the contest. 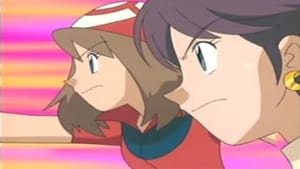