May is practicing for her next Pokémon Contest, when Torchic finds a Skitty in the bushes. May wants to catch it, but it’s too sick to battle. Brock leads the group to the Greenhouse, where Skitty can be healed using Aromatherapy.

Eliza the therapist shows the kids her fragrance collection and uses a special mixture to make Skitty better while it sleeps. Meanwhile, Team Rocket flies overhead in a balloon and decides to steal some fragrance for their Pokémon.

Skitty wakes up feeling much better, and May battles it using Torchic. Her attempt to catch Skitty is interrupted by Team Rocket bursting in. Jessie’s Seviper uses Haze, causing a lot of confusion. Meowth completely falls for Skitty.

Team Rocket flees, but Ash’s Taillow wrecks their balloon. They manage to get away with one bag, finding Skitty inside. Jessie claims it as her own, much to Meowth’s dismay. He helps Skitty run away.

May and friends locate Team Rocket, and Jessie and May get into a fight over who gets to catch Skitty. May’s Beautifly knocks out Jessie’s Dustox. Pikachu uses Thunderbolt to send Team Rocket blasting away.

May takes out her Poké Ball to catch Skitty, but Skitty knocks it out of her hand and jumps into it. As they’re walking away, Skitty jumps out of the Poké Ball. 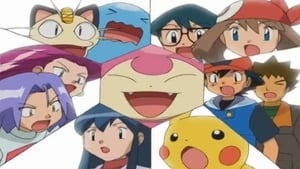