The kids arrive in a city where May lets her Bulbasaur to enjoy the scenery. Meanwhile, Team Rocket is at the Pokémon Center (PC) making “repairs” to the transporter machine.

Upon arrival at the PC, Ash calls Professor Oak. They decide that Ash’s and May’s Bulbasaur should meet, so Oak transports Ash’s over. Unfortunately Team Rocket has rerouted the machine so they get all the full Poké Balls, and only empty Poké Balls arrive at the PC.

The kids confront Team Rocket outside the PC. James has attached a new engine to their balloon which malfunctions, so the thieves go blasting off. They drop one Poké Ball—Ash’s Bulbasaur.

Team Rocket gathers up everything from the crash site and runs, but a hole in James’ bag leaves a trail of Poké Balls along the way. The two Bulbasaur quickly pick up the trail to a cabin where the thieves are hiding.

Team Rocket seals up the cabin and begins fending off Ash and friends, using the Poké Balls as projectiles. The two Bulbasaur try to sneak the rest of the Poké Balls out through a window with their vines.

Pikachu breaks down the wall with Iron Tail, and the Bulbasaur team up to battle Team Rocket. Pikachu sends the thieves blasting off.

Back at the PC, Ash talks to Professor Oak again, who begs Ash to send Bulbasaur back. Everyone says goodbye, and the little Grass-type is sent home. 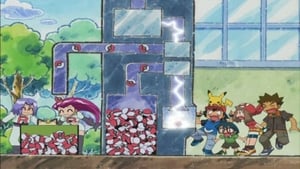