A Scare to Remember!

As Ash and friends walk to Lilycove City, a tree comes crashing down in front of them—pushed over by Team Rocket in their newest giant robot! They have Pikachu in hand, when the robot begins to sink into the ground and crumple. It explodes, sending everyone flying.

The kids find themselves stuck in a tree—without Pikachu. Team Rocket is lost, and Meowth is nowhere to be found. Pikachu and Meowth wake up next to each other, and to Meowth’s delight, Pikachu has no memory. Meowth convinces Pikachu that it was a part of Team Rocket and that the two of them are best friends.

While the pair makes it may back to Team Rocket’s secret base, Meowth witnesses Pikachu saving a Zigzagoon, not being scared of a high ledge, and even sharing an apple with Meowth. Eventually they make it back to the base, and Meowth updates Jessie and James.

Ash and friends track down Pikachu to the cabin, where Team Rocket has Pikachu attack Ash. They try to get away in a balloon, but Ash grabs on. James orders Pikachu to use Thunderbolt, and they end up crashing. Ash and Pikachu land in the river and wash ashore. When they awake, Pikachu has its memory back.

Team Rocket lands in the water nearby, and Pikachu sends them blasting off. 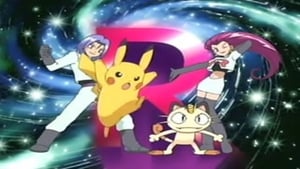