Take This House and Shuppet

Team Rocket crash lands in front of a mansion, and start to argue. But a beam fired by a Shuppet hidden in the bushes calms them down. They enter the mansion in search of food, but the door locks behind them. They start to argue again, but are again calmed by Shuppet.

Ash and friends are lost outside when it starts to rain. They eventually make their way to the mansion and get locked inside as well. May and Max start to argue, and Max runs off.

Max runs into Shuppet, and the two of them explore the mansion and play. They overhear May still saying some nasty things about Max, so Shuppet plays a joke on the kids by using Psychic to move things around in mid-air.

May meets Emily, the owner of the mansion. Emily wants to turn the mansion into a hotel, but can’t because it appears to be haunted. Everyone splits up to look for Max.

Max and Shuppet are hiding when Team Rocket comes in, followed by May’s Torchic. When they threaten the little Fire-type, Max jumps out to protect it. May comes in, and battles with Team Rocket. An armoire almost falls on May and Max, but Shuppet stops it.

Emily recognizes the Shuppet from her childhood, but Team Rocket grabs it, flying off in a balloon. Ash’s Swellow breaks Shuppet free, and Pikachu sends the team blasting off.

Max and May apologize to each other, and Emily bids them all farewell. 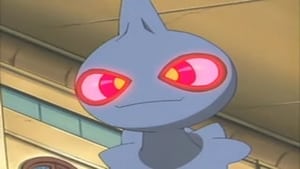