Shedinja attacks Misty and friends, but they are protected by Togepi using Safeguard. Everyone is then transported into the Togepi Paradise, located inside the mirage floating above the temple. There they find a group of sick Togepi. It is explained that Togepi are only well based on the emotions of those around them, and the evil plotting of Colonel Hansen is making them sick.

Colonel Hansen tries to break into the Togepi Paradise, and Misty’s Togepi travels back to try and stop him. Instead Togepi is knocked out by Hansen’s Shedinja and Ninjask. Misty and everyone else are transported back to the Mirage Kingdom.

Back at the palace Hansen claims the throne, and has the king imprisoned. He kicks Team Rocket out. A ceremony begins in which Hansen is declared king. Outside, Team Rocket disguise themselves as fortune tellers to tell Brock where the king is being held.

Ash, May, Misty, and Princess Sara confront Hansen at the palace, but Torchic and Pikachu are no match for Ninjask and Shedinja. The other Togepi suddenly emerge from the Togepi Paradise and and channel their energy into Misty’s Togepi, using Safeguard to protect everyone. Misty’s Togepi evolves into a Togetic.

Misty throws out her Gyarados and uses Flamethrower to roast all of Colonel Hansen’s Pokémon. The king arrives and has Hansen arrested. Togetic decides to stay and protect the Togepi Paradise. All of the Togepi leave, except for one who jumps into Sara’s arms. With that Togepi, the princess can now claim the Mirage Kingdom throne.

Everyone bids Misty goodbye as she heads back to Cerulean City aboard a zeppelin. 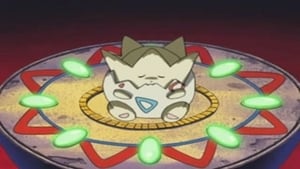