Fight for the Meteorite

The gang rushes to the cable car headed up Mt. Chimney, boarding it just in time along with a disguised Team Rocket. As the car travels upward, they spy both a red helicopter and a gray helicopter.

Team Magma departs with the knowledge that their machine worked. Team Aqua leaves, pleased that Team Magma did not succeed. Team Rocket falls down Mt. Chimney. Ash and his friends get directions from Professor Cosmo and head for Lavaridge Town. 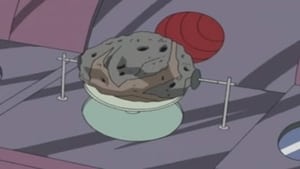