Me, Myself and Time

The kids are crossing a mountain in the fog, and Ash trips and slides down a cliff with Pikachu. He encounters a mysterious woman singing a strange song.

Pikachu stops a Baltoy from spinning off a cliff. Its Trainer, a girl named Callista, arrives and explains that she is searching for ancient artifacts from the Baltoy civilization. Her parents forbid her to search, but a mysterious phone call sent her to the mountain that day.

Team Rocket is also on the mountain, and they attack the mysterious woman, who fights them off with her Xatu. Callista and Ash help fight the thieves off, and the woman leads them to a cave with the ruins that Callista has been searching for. A pile of rubble lies on top of the most important artifact, and the woman explains that her Baltoy is trapped under it. Callista’s Baltoy clears the rock and frees the other Baltoy.

Team Rocket attacks again with a drilling machine, but they are driven back and sent blasting off as usual. The woman explains to the kids that the artifact is a time machine and reveals the truth to them—that she is a future version of Callista! She explains that she spent her whole life searching for the Baltoy civilization and now has no time to study it—but now the younger Callista can. The elder Callista disappears into the machine with her Baltoy.

The kids leave the ruins, and Ash reunites with his friends, in a hurry to get to his next Gym battle. 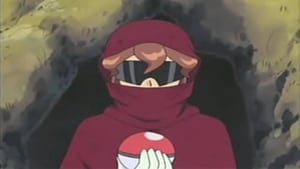