From Cradle to Save!

Ash takes a break to train with Donphan and Pikachu, and Donphan uncovers a young ninja named Evian. He’s from the Pokémon Ninja School, where Trainers and their Pokémon study the ninja arts together, and he thought Ash and his friends might be behind a recent rash of strange events and robberies. After he apologizes, our heroes enroll in the school for day and try out ninja techniques with their teacher, Angela. Team Rocket secretly watches and waits—Jessie has big ninja dreams of her own!

Angela has everyone try to find her Kecleon, which is easier said than done for Ash. During the exercise, the students find a Bonsly and blame it for the thefts. Brock calms the crying Bonsly down and proves its innocence. The real thieves are Team Rocket, who swoop in to steal the students’ Pokémon but are clearly outmatched. Jessie, never one to give up, still challenges Angela to a ninja battle and the real ninja easily wins. Then it’s time for everyone to send Team Rocket bouncing on their way again.

With Team Rocket gone, Bonsly wants a battle with Brock. Brock sends out Forretress and uses Spikes to weaken Bonsly so he can capture it. Now he has a new Pokémon! A baby Pokémon! Who needs lots of attention and care… is Brock really ready to be a “father”? Our heroes continue on their way to the Battle Pike with their newest, youngest team member! 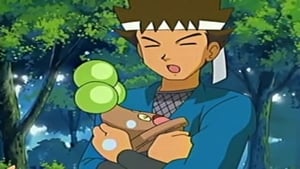