Ash is about to reach the Battle Arena, but Team Rocket has gotten there ahead of him! They’re pretending to be students of Greta, the Arena Tycoon, but the curriculum is a little too tough for them. Will this trick really let them get their hands on Ash’s Pikachu? Meanwhile, Ash runs into Scott, who tells him that Greta prefers Fighting-type Pokémon. This gives Ash an idea…

Scott and Ash show up at the Battle Arena, where Greta has Ash spin a wheel to determine how many Pokémon they’ll battle with. Ash spins a two, so Greta’s Hariyama and Medicham will face off against Ash’s Grovyle and Snorlax, who Ash brought back just for this battle. Grovyle is fast, but Hariyama uses its speed against it and Grovyle is soon knocked out. Ash sends out Snorlax and uses a defensive strategy to defeat Hariyama, whose powerful punches aren’t as damaging to the big Pokémon. Greta’s Medicham could be a different story, though!

Team Rocket is accidentally revealed during the Pokémon battle, but Pikachu zaps them before they can do anything. Then it’s right back to the battle, where Medicham’s attacks are proving to be pretty dangerous to Snorlax. After some close calls, Ash hits on a novel idea: have Snorlax use Hyper Beam to propel itself into the air and land on Medicham! This wins Ash the battle—and a shiny new Frontier Symbol! Greta tells Ash that the next stop on the Battle Frontier is the Battle Dome, and he’s soon on his way! 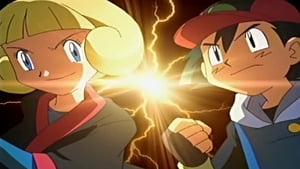