Off the Unbeaten Path!

Ash and his friends enter an orienteering competition on Potpourri Island! For this stamp rally challenge, Trainers and their Pokémon compete to be the first to find all the different destinations and stamp their map at each one. The winner gets the Teamwork Medal and boxes of juicy fruit! May lets Max team up with Munchlax and then our heroes—and Team Rocket—split up to enter the race.

Jessie and Meowth decide not to bother with the map, a plan that doesn’t work out too well. So they hit upon an even better plan: sabotage the other competitors so James and Mime Jr. can win the grand prize for Team Rocket! The other teams are making progress, but Max isn’t doing so great and has to cover it up when he runs into May. To make things worse, Jessie and Meowth cut a bridge while Max and May are still on it. Luckily, Ash and Brock get there just in time for a rescue.

Jessie and Meowth return to the Pokémon Center, where they net our heroes’ other Pokémon and all the fruit for the prize. Swellow gets away and warns Ash, who catches up to the criminals at the crime scene. Jessie and Meowth obligingly stop to recite the Team Rocket motto, which gives Ash’s friends plenty of time to sneak around them and retrieve everything they stole. After that, it’s no contest. Though Jessie and Meowth are defeated once again, their hopes rise when James and Mime Jr. win the competition—except James happily gives away the prize fruit! 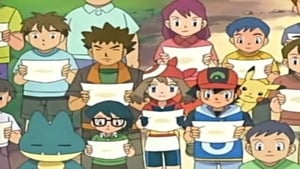