Ash has finally reached the Battle Dome, and what a reception! An eager crowd of journalists wants to meet the new challenger who’s going to take on Tucker, the famous Dome Ace. Ash is whisked off to his first press conference and he’s having fun until he admits he doesn’t know who Tucker the Dome Ace is, to the horror of all the reporters.

Team Rocket knows who Tucker is—when they’re not selling snacks at the Battle Dome, they’re busy pretending to be his hairdressers. Tucker knows how to please a crowd, and Ash makes his big Battle Dome entrance only to be outshone by Tucker and his tons of screaming fans! Tucker sends out Swampert and Arcanine, so Ash chooses his Corphish and Swellow. But type advantage won’t be enough against Swampert and Arcanine’s teamwork and combos!

The battle heats up immediately and there are plenty of surprises in store for Ash. For one thing, Tucker’s speedy Arcanine knows Aerial Ace, and goes head to head with Swellow! Ash also needs to find a way around Swampert’s strong defense. It turns out Tucker’s all about strategy as well as showmanship, so Ash has a rough time until he figures out how to counter Tucker’s tactics with a few of his own. Corphish and Swellow then deal a knock-out combination to win the round. Ash leaves the Battle Dome with a shiny new Tactics Symbol and memories of an amazing experience! 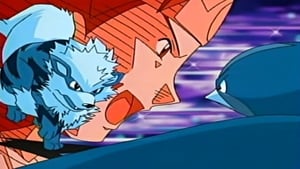