May, We Harley Drew'd Ya!

May has arrived at the Indigo Plateau Grand Festival, where there are many familiar faces in town. Team Rocket is turning over a new leaf as Contest commentators. And Aipom has followed Ash all the way there, but its latest hat-snatching spree is halted by Drew and another Coordinator, Solidad. Solidad is an experienced Coordinator and an old acquaintance of Drew, so it’s no wonder that with all this competition, May is feeling a few butterflies.

That night, May sits down and has a talk with Solidad, who helps restore her confidence. Solidad even tells her some tales about her early encounters with Drew. May also has a mystery admirer who sends her a very strange flower. With one of May’s biggest rivals yet to appear, it’s easy to guess who it is—but what is he up to?

The next day, the first round begins! May and Combusken put on a good show, but Solidad and her Lapras are impressive. Drew and Masquerain look good, too. Then Harley makes his big appearance, dressed up as May! His memorable performance with Banette earns him a spot in the next round, along with all his rivals. Afterward, all four Coordinators run into each other again. And while only one person can win the Grand Festival, each of them is confident that they’ll be the winner! 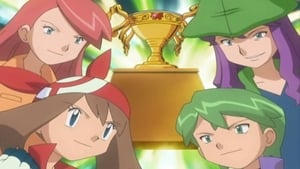