The competition is underway at the Mulberry Town Pokémon Contest, where Harley has teamed up with Team Rocket to plot May’s downfall. While May is getting ready for her first opponent, Team Rocket lures her friends into a sealed transport container and sends them up, up and away with a Meowth balloon! But they didn’t count on Drew being there to save the day. He frees Ash and the others, only for all them to then fall into one of Team Rocket’s old-fashioned pit traps. While James and Meowth gloat, our heroes realize Team Rocket is working with Harley, and they have to get back to the Contest to help May.

Up on stage, May and her Squirtle are preparing to face Jessie, who’s disguised as Jessebella and using Harley’s Cacturne. Below the stage, Harley and Team Rocket are preparing some more tricks when our heroes catch up to them. Harley points out that there’s no rule against using someone else’s Pokémon in a Contest, but his plans are foiled for now.

Meanwhile, Jessie’s initial delight wears off when even Banette can’t easily win her the match. Banette gets annoyed by Jessie’s complaints, and it looks like the odds are back in May’s favor. But as time runs out, the two Coordinators are matched in points, and it goes into overtime! Jessebella is eager to win, but she’s snapping at Banette and without a good understanding between Coordinator and Pokémon, it’s only a matter of time before May wins and the ribbon is hers. Harley gives up on Team Rocket in disgust. May meets Drew and the two are looking forward to a match-up at the Indigo Plateau. As for Ash, he’s looking forward to the Battle Pyramid! 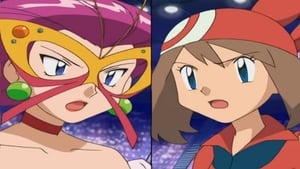