Ash has reached Fennel Valley at last, where he plans to challenge Brandon to an official battle—but Brandon won’t be back until tomorrow! Instead, our hero is welcomed by an enthusiastic Nurse Joy. This Nurse Joy loves Pokémon battles and Contests, and she even offers to help Ash train. Her Chansey may look sweet, but once its nurse’s hat comes off, so do the gloves! Chansey quickly outpowers Ash’s Corphish, teaching Ash a lesson about battle strategy that doesn’t make him too happy.

Later, Ash goes out to visit Brandon, who is still busy searching for a very rare Pokémon. Brandon tells Ash that he intends to use Registeel in their official battle, so Ash decides to call in some help from back home. When the battle starts the next day, Ash unveils his secret weapon: his old friend Torkoal!

Ash intends to counter Brandon’s Registeel with Torkoal’s Fire-type advantage and its latest move, Heat Wave! However, it takes more than just a new move to stop Brandon’s Registeel. Even though Ash uses his usual creative strategies, Brandon’s Registeel wins the day with its devastating Zap Cannon attacks and the Lock-On move that makes sure it doesn’t miss! Refusing to give up, Ash promises to battle Brandon again. But after two losses to the Pyramid King, can he figure out a winning strategy and complete this final Battle Frontier challenge? 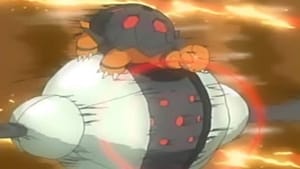