Gathering the Gang of Four!

At the Fennel Valley Pokémon Center, Ash gets a special delivery from Oak’s Lab—his Bulbasaur. Officer Jenny soon arrives with his Squirtle, and his Charizard flies in too. Ash is going on a retreat with these three Pokémon and Pikachu to train for his upcoming rematch with Brandon. Out in the forest, the four Pokémon work together to build a bed to sleep on, but Charizard hogs it at first and starts a fight. Eventually they calm down and rebuild the bed, get some food, and even practice their moves. That night Charizard lights a campfire, and Ash remembers how he met Pikachu, Charizard, Squirtle, and Bulbasaur.

Team Rocket happens to be watching, and they drive up in a noodle truck in which they manage to grab Pikachu. The truck releases a metal balloon that they then escape in. Ash takes to the air on Charizard, and has his Pokémon perform various attacks on the balloon to no avail. Eventually Charizard and Squirtle alternate their attacks, causing the balloon to crack so Bulbasaur can break it open. The four Pokémon then team up their attacks to send Team Rocket blasting off. Brandon emerges from the bushes nearby to tell Ash it’s time to battle, and that they should make it a 4-on-4 battle with his four Pokémon.

Back at the Pokémon Center, Scott lets Ash know that he could be a Frontier Brain if he beats Brandon, but Ash is more worried about winning first. At the Battle Pyramid, the battle begins with Charizard versus Brandon’s Dusclops. Dusclops traps Charizard in battle with the move Mean Look, and then uses Confuse Ray to confuse it. Eventually Charizard snaps out of its confusion. Ash makes a fatal error by having Charizard use Seismic Toss, which has no effect on Ghost-types like Dusclops. Dusclops performs Shadow Punch, knocking Charizard out. 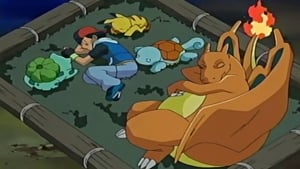