King and Queen for a Day!

On their way to the Battle Tower, our heroes win a free massage from a thinly disguised Team Rocket. The treat turns out to be a trap when Team Rocket tries to snatch their Pokémon, but Munchlax’s Metronome sends Team Rocket flying—along with Bonsly, Mime Jr., Meowth, and Pikachu, who end up lost in the city! What’s worse, they’re now being chased by a bunch of goons in suits. With Meowth’s help, the Pokémon evade their pursuers and even get a free meal.

Meanwhile, Ash and his friends encounter a different Bonsly and Mime Jr., who turn out to be the starring king and queen of a hit TV show. The same TV show whose set Meowth has just wandered onto, in fact! Meowth and Team Rocket are reunited with a new plan: Mime Jr. and Bonsly will replace their royal counterparts and make Team Rocket a fortune! However, the real King Bonsly and Queen Mime Jr. have been found—the goons in suits Meowth saw were actually hired by the talent agency to find their runaway actors—and Ash and his friends come to check out the set as well.

With Trainers and Pokémon together again, everyone is eager to be on TV. Everyone’s getting along fine until Jessie doesn’t get enough camera time. Irate, she calls for Team Rocket to show its true colors! Bonsly and Mime Jr. do battle on camera, thrilling the director but not Jessie. She calls out Seviper to put an end to the antics, but Pikachu sends Team Rocket blasting off and that’s a wrap! 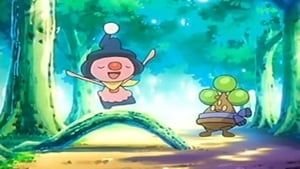