Cutting the Ties that Bind!

Ash has arrived at Metallica Island, home of the Battle Palace. He’s ready for battle, but Sceptile isn’t—its attack moves still aren’t working and it runs away in frustration. When Ash follows, they’re attacked by a swarm of Beedrill and fall into a river, losing Sceptile’s Poké Ball along the way! Pikachu is washed away, but Ash manages to grab Sceptile. Scott finds Ash’s friends and tells them this is the time of year when the island’s Kakuna evolve, so the Beedrill are extra vigilant—everyone had better grab some Repel and find Ash fast.

Elsewhere in the forest, a kind old man and his Venusaur rescue Pikachu and take care of it at their campsite. Scott finds the campsite and introduces Ash’s friends to Spenser, head of the Battle Palace! Spenser encourages everyone to take a rest before they resume looking for Ash.

Ash and Sceptile continue to search for Pikachu, but the Beedrill chase them to a dead end. Ash is hurt protecting Sceptile, and Pikachu and the others arrive just in time to calm the Beedrill down. Team Rocket then swoops in, snatching Pikachu and Sceptile. Ash tries to stop them from escaping in their balloon, but Jessie’s Dustox knocks him off. Seeing this, Sceptile uses its moves to rescue Ash, though the effort leaves it worn out. A little healing from Spenser’s Chansey restores Sceptile’s strength, and now it can finally send Team Rocket blasting off! With Pikachu found and Sceptile back to normal, Ash challenges Spenser to a battle—after a good night’s rest for everyone, of course. 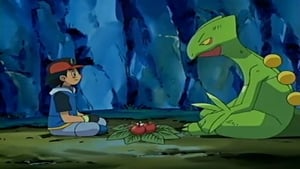