Queen of the Serpentine!

Ash heads for the Battle Pike ahead of his friends, and finds himself at a facility staffed by three suspiciously familiar faces and their Wobbuffet. Ever trusting, Ash challenges their “Pike Queen Lucy” to a battle. In the meantime, the real Battle Pike crew has come to meet the new challenger, and they’re displeased when Ash doesn’t show. Brock is instantly smitten by Lucy, the real Pike Queen, who comes to the rescue when Team Rocket reveals their fake Battle Pike and tries to run off with Pikachu. She bursts their bubble and defeats Jessie’s Seviper with a powerful Seviper of her own.

Now the real Battle Pike challenge can start! First, Lucy’s Seviper battles Ash’s Donphan. Even without using defensive moves, Seviper and its Flamethrower attack are tough to beat! Scott explains that Lucy’s style is to forget about defense and just hit as hard as possible, but this strategy works against Lucy when Donphan uses a fiery Rollout to defeat Seviper.

Next up is Milotic, who knocks Donphan out with a one-shot Hydro Pump. Pikachu enters the field, only to take the brunt of Milotic’s powered-up offense. Ash has to think quickly and figure out how to use Milotic’s strength against it, ordering Pikachu to take advantage of Milotic’s moves to boost its own attack. This does the trick and knocks Milotic out, earning Ash the Luck Symbol. Ash and his friends are now headed for the Battle Palace and May’s next Contest… but before they leave, Brock manages to make a sweet impression on Lucy after all! 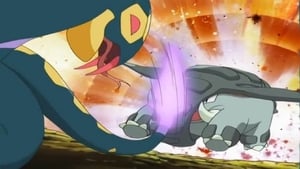