It’s time for the Silver Town Pokémon Contest, and May is ready to win! As the show starts, one last competitor arrives late: a businessman named Jeremy. He doesn’t look like much, but after May makes her big entrance with Squirtle, she’s surprised to see Jeremy dressed up like a rock star onstage with Butterfree! However, Jeremy’s wife and son show up and demand that he stop his embarrassing Contest antics.

With encouragement from May, Jeremy stands up to his family and explains how important Contests are to him. No matter what, he’s going to compete! Both May and Jeremy make it to the finals, but will Jeremy’s family come back to watch? Outside the Contest, his wife remembers how she met him back when he was a real musician. As she reminisces, she starts to think what Jeremy’s doing isn’t so silly after all.

Back at the Contest, Jeremy sends his trusty Venusaur to battle May’s Combusken. As a Fire-type Pokémon, Combusken should have the advantage, but Venusaur is too tough to be defeated that easily. Venusaur also has a powerful Frenzy Plant attack, and soon May is losing points fast. She risks it all on one last Sky Uppercut and Combusken knocks Venusaur out just before time is up. Victory goes to May! And Jeremy may not have won the ribbon, but his family finally respects him as a Pokémon Coordinator. A happy ending all around—except for Team Rocket, who goes hunting for berries and finds Beedrill instead! 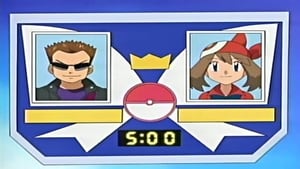