Our heroes spot a confused flock of Pokémon and realize something isn’t right, especially once an unusual aurora appears in the sky and their Poké Balls and PokéNav stop working! That’s when they spot Solana, the Pokémon Ranger, who helps get the Pokémon going in the right direction. She explains that the Rangers have detected strange geomagnetic activity, and just then, the group sees a Deoxys in the sky! Could it be the source of the disturbance?

With Nurse Joy’s help, Solana reasons that Deoxys may be connected to an old meteorite that crashed nearby. Solana goes to investigate alone—at least, that’s what she thinks. Team Rocket wants Deoxys for the boss, and they secretly follow her to the meteorite cave. So does Max and the rest of the crew! Solana reluctantly lets Ash and company tag along. Inside the cave, she finds a Miltank and captures it because it may help them with Deoxys.

Once they find the meteorite, Deoxys emerges. It’s in pain and is clearly hostile to them, but Solana can’t capture it to calm it down unless it’s in Normal Forme. She has Miltank use Heal Bell to soothe Deoxys’ pain, but it still won’t be captured. Team Rocket reveal themselves, but Max and Meowth are getting strange impressions from Deoxys so both of them try to talk to it. Deoxys possesses Meowth and uses it to communicate with Max, but this backfires when Deoxys vanishes into a strange dimension and decides to take both Max and Meowth with it! 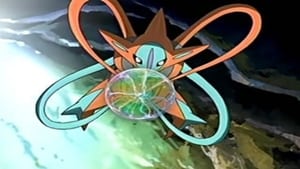