Ka Boom with a View!

Ash’s Battle Palace challenge against Spenser is about to begin, and it’s going to be one big battle when the island itself is the true battleground! Ash’s friends take to the skies in a hot air balloon to watch, and since no regular referee can keep up, a hovering robot called Jamero will keep everyone informed of what’s going on. The first battle will be Spenser’s Shiftry against Ash’s Sceptile, and naturally the pair take to the forest to have their battle. Sceptile, back and better than ever after its recent romantic woes, takes a dunking during the fight but comes back to knock out Shiftry.

Next up is Spenser’s Venusaur. Ash has brought Heracross in just for this match, although Heracross seems more interested in seeing if Venusaur’s flower has anything tasty to eat. Speaking of tasty, after Venusaur’s mighty Solarbeam defeats Heracross, Spenser takes time out of the battle for a snack break. After that refreshing pause, Swellow battles Venusaur on the beach, where the sun could prove to be an advantage for Venusaur. But the weather is unpredictable and a cloudy sky is no help for Venusaur’s Solarbeam. That gives Swellow an edge that wins it the round, and now it’s time for Spenser’s Claydol.

Claydol is packing a powerful Hyper Beam that knocks Swellow out in short order, so now it’s up to Sceptile. Things could be tough when a sudden squall blows through, but the clouds part and this time the sun is shining for Ash! The sunlight helps Sceptile charge up and its Solarbeam finishes the match, winning Ash his fifth Frontier Symbol. Next stop: the Battle Tower! 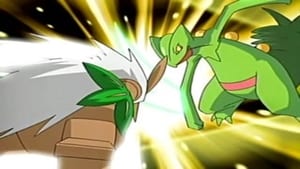