The Ole' Berate and Switch!

Team Rocket decides to go their separate ways after yet another foiled Pikachu kidnap attempt. Elsewhere, our heroes come across a one-day Pokémon Battle Tournament secretly run by Butch and Cassidy, who are having their own problems getting along. Ash signs up, unaware that while he’s battling, Cassidy is preparing to swipe the competitors’ Pokémon! Cassidy runs into Jessie and James, and decides to make James her new team. As for Jessie, she fast-talks her way into a partnership with Butch.

Max has spotted the villains at work, however, and as Ash is celebrating a victory, he runs to tell everyone what’s really happening. Our heroes go to rescue the Poké Balls and encounter Cassidy and James, James unsuccessfully trying to pretend that he’s Butch. Corphish cools off Cassidy’s Houndour and Team Rocket’s scam is revealed to the tournament competitors, leading to a showdown with Team Rocket minions.

Jessie and Butch try to make a stealthy getaway, but Ash spots them and Pikachu puts a stop to their thievery. Meanwhile, Meowth is trying to steal a few Poké Balls for himself when it bumps into Jessie and James. They remember the good times they had together, and decide to reunite once more. So when Ash sends them blasting off, they blast off as friends—at least for now! The other Trainers are reunited with their Poké Balls, and now it’s time for our heroes to head for the Pewter Gym. 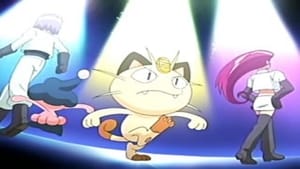