May, Drew, Harley, and Solidad are all competing in the Grand Festival, and it’s time for their Pokémon to show off their best moves. Only 16 Coordinators will advance to the next round, so the pressure is on! Although Drew and Absol do a great job, he’s not at all happy with Absol’s performance. May is shocked to see him angry at his Pokémon, and she’s even more hurt when he takes some of his frustration out on her. Drew later calms down, but his tension showed how seriously he’s taking his rivalry with May.

The round of 16 sees May sending out Munchlax and Eevee against Harley’s Cacturne and a not-so-cuddly Wigglytuff. Munchlax and Eevee team up to knock Cacturne out of the match, but Wigglytuff is an even tougher foe. With its flexible body, it’s hard to score a solid hit until May figures out how to get an aerial advantage. Wigglytuff is knocked out and May moves on to the top 4, where she’ll be facing off against Drew.

This time May uses Combusken and Squirtle, while Drew uses Flygon and Absol. The battle immediately heats up, and with Solidad still in the competition, the path to Grand Festival victory only gets tougher from here! 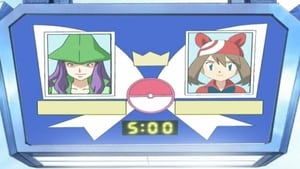