With Charizard out of the battle for his rematch against Pyramid King Brandon, Ash calls out Bulbasaur. Dusclops performs Mean Look again, while Bulbasaur wraps the Ghost-type with Leech Seed. The two Pokémon are evenly matched, but Bulbasaur takes a beating from the Fire-type move Will-O-Wisp and is affected by Confuse Ray, which causes it to use Vine Whip on itself. Because Leech Seed is taking energy from Dusclops and giving it to Bulbasaur, the Grass-type manages to stay in the fight, using SolarBeam to knock Dusclops out.

Brandon sends out Ninjask next, while Ash sends out Squirtle. The two move quickly, and are perfectly matched until Ninjask blinds Squirtle with Sand-Attack. Squirtle listens for its opponent, and eventually recovers by clearing out its eyes with Hydro Pump. Squirtle strikes with Skull Bash, knocking out Ninjask. Brandon then calls out Solrock. Squirtle stays in the battle, but eventually Solrock takes it down with SolarBeam, a Grass-type move.

Meanwhile, Team Rocket is sneaking into the Battle Pyramid, but they are caught and blasted away by Regirock and Registeel. In battle, Ash sends Bulbasaur back out, who does a good job of dodging. Eventually Solrock and Bulbasaur face off with their SolarBeam attacks, resulting in a double KO. Ash and Brandon send out their final Pokémon, Pikachu and Brandon’s new Regice. Regice’s attacks quickly ice up the field, making it hard for Pikachu to keep steady. Pikachu still makes an impact with Thunderbolt and Iron Tail, but Regice traps Pikachu and then uses Rest to heal up. Regice hits Pikachu with Ice Beam, freezing it in a block of ice, and the Electric-type is almost defeated, but Pikachu breaks out with Thunderbolt and strikes back with Iron Tail. Regice attempts to trap Pikachu and use Rest again, but Pikachu breaks down and charges with Volt Tackle, knocking out Regice.

Ash is awarded the Brave Symbol, making him a Master of the Battle Frontier and entering him into the Hall of Fame. Scott offers Ash a Frontier Brain position, but he turns it down in favor of more traveling. Squirtle, Charizard, and Bulbasaur all return to their homes. 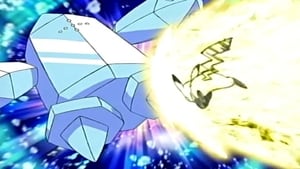