As Ash eagerly heads for the Battle Tower and his sixth challenge, he accidentally stirs up a horde of Beedrill who chase him down! Fortunately, he’s saved by a stranger who calms down the Beedrill and an upset Gyarados nearby. Just then, Team Rocket makes another Pikachu snatch attempt, but they’re stopped by Pikachu and the stranger’s Alakazam. Ash’s friends catch up to him and everyone is invited back to their new friend’s house to dry off.

Their new friend is named Anabel, but Ash doesn’t stick around long—he has a Battle Tower to get to! Once he gets to the Battle Tower, he discovers that Anabel is in fact the Salon Maiden of the Battle Tower! Ash sends out Corphish against Anabel’s Alakazam, but Anabel’s uncanny ability to mentally communicate with Pokémon means Ash doesn’t even known what commands she’s going to give. It doesn’t take long for Alazakam to knock out Corphish, so Ash brings out his Tauros, which he had sent over just for this battle. But brute strength won’t win the day—Alakazam knocks it out too!

Now it’s up to Pikachu, but it’s confused by Alakazam’s Psybeam. To keep Pikachu from hurting itself, Ash throws himself in front of its Volt Tackle, which snaps Pikachu out of its confusion. Pikachu goes on to defeat Alakazam, but Anabel has another heavy hitter lined up: Metagross! Though Pikachu does its best, Metagross has powerful attacks and its Hyper Beam finally knocks Pikachu out. With his Battle Tower challenge ending in defeat, what is Ash going to do now? 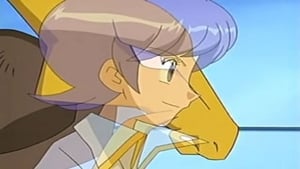