When May’s Munchlax gets sick and there’s no Pokémon Center nearby, it’s a kindly old couple (and their Mime Jr.) to the rescue! They meet May and her friends and offer to help them out. James’ Chimecho has gotten sick, too. But he sees a grand manor nearby and takes Chimecho there for help—it’s the home of James’ beloved Nanny and Pop-Pop, who looked after him when he was a boy. To protect their feelings, James lies about his line of work. And since Nanny and Pop-Pop are the ones who came to May’s aid, he needs May and Ash to help cover for him when he finds out they’re staying at the house as well!

With the help of Nanny and Pop-Pop, Munchlax is well on its way to recovery, but Chimecho is still sick. James is deeply concerned, not to mention very busy trying to keep Jessie and Meowth from eating all the food and stealing all the other Pokémon around the house! The last straw is when Jessie and Meowth try to creep away with Mime Jr. and Munchlax. James catches them and unexpectedly teams up with Ash to put a stop to their shenanigans… and keep Nanny and Pop-Pop from discovering what’s really going on.

Soon Munchlax is ready to hit the road again, and May and her friends gratefully take their leave. But James is distressed because Chimecho is too weak to travel. He must leave Chimecho with Nanny and Pop-Pop until it fully recuperates, and both Trainer and Pokémon are sad to see each other go. However, Mime Jr. wants to travel with James, so he says his fond farewells and leaves with Jessie, Meowth, and his new Pokémon. 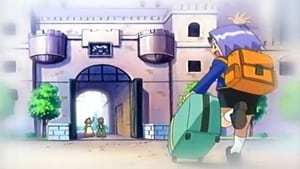