Our heroes have finally made it back to Pewter City, where Brock once again comes home to find the Pewter Gym looking stranger than ever. When he gets in the door, he discovers that his mom and dad are headed off on a free prize vacation, leaving the Gym in the care of three suspicious Gym remodelers who promised to make the Pewter Gym fashionable. His parents even took his Ludicolo to carry suitcases! Of course, it’s all another Team Rocket scheme in disguise.

On a happier note, Brock meets Steelix, his evolved Onix. His siblings beg him to help them put the Gym back to normal. Team Rocket returns and realizes their new plan is full of twerps, but Team Rocket’s Delibird drops off Poké Balls for them containing a Charizard and Aggron! With this firepower, they go in and challenge Brock to a battle—if they win, they decorate the Gym any way they want! Ash offers to help Brock out and it’s time for a double battle.

Brock uses his Steelix, Ash uses his Donphan. Charizard is a tough opponent for Steelix to go up against and Aggron’s no slouch, either! But Brock and Ash have teamwork on their side, unlike Team Rocket. Meowth sneaks off to steal Poké Balls while everyone is distracted, but Max blows its cover. Now Team Rocket’s secret is out, and Brock’s brother Forrest is outraged. Forrest, Brock, and Ash team up to beat Team Rocket. When Brock’s parents come home, they get quite an earful from Brock, but family is family, after all. As for Team Rocket, they discover that all the bonuses they were getting were really meant for Butch and Cassidy! 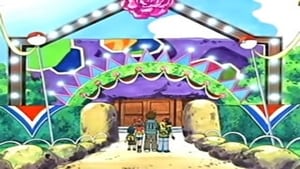