On the way to the Battle Pike, Ash and his friends spot some strange and stormy weather nearby. What’s more, an irritable Elekid is busy zapping all the local Pokémon! Pikachu and Phanpy try to stop Elekid, but in the confusion, May’s Pokémon Egg lands on Elekid’s head and Elekid gets away. Team Rocket finds Elekid—and the Egg—but Elekid zaps them too and now Mime Jr. is lost as well!

Ash and his friends find Mime Jr., who tags along as they search for May’s Pokémon Egg. Meanwhile, Elekid continues to use its Electric-type moves on everyone who crosses its path. Lightning from that nearby storm has overcharged it, so now it has to release the excess energy. When Ash realizes what’s going on, he has Pikachu charge up the same way. Now Pikachu is ready to battle with Elekid, which should drain enough energy to restore it to normal!

Team Rocket shows up with their latest robot, but James calls time-out so he can swap the Pokémon Egg for Mime Jr. Now it’s back to stealing Pokémon! The robot is shielded against electricity and too tough for Phanpy to defeat, but Elekid and Pikachu team up for a super-powerful Thunder move that releases their extra charges and overloads the robot. Then Phanpy evolves into Donphan and sends Team Rocket on their way. With everything finally back to normal, our friends can continue their journey to the Battle Pike! 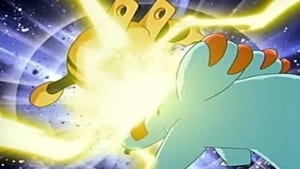