With Meowth and Max both vanished after an encounter with Deoxys, Team Rocket makes a truce with the twerps so they can rescue their favorite talking Pokémon. Solana suggests that recent solar winds may be linked to the strange geomagnetic activity focused on the meteorite cave, so our heroes return to the cave in search of Meowth and Max. Those two are currently floating in a strange space along with Deoxys. Deoxys possesses Meowth to explain to Max how it came to this world on a meteorite, but ended up in the cave with no friends.

When Solana and the group reach the meteorite, they realize it’s the source of all the strange phenomena they’ve witnessed—and there’s tremendous energy building up around it! Rescue has to wait as everyone tries to get clear, but an explosion from the meteorite throws everyone out of the cave. Deoxys shows up and Solana realizes that these chaotic energies are what’s causing Deoxys pain, but she can’t capture it to help it unless it’s in Normal Forme.

Everyone pitches in with their Pokémon to keep Deoxys distracted until it returns to Normal Forme. Meanwhile, a portal to Deoxys’ dimension reappears, with Max and Meowth floating inside. They’re not feeling too great, either! Team Rocket and May rescue them from the weird fissure just before it closes again. Solana finally captures Deoxys and has it heal itself with Recover. But the energies are still going haywire, so just as the meteorite finally explodes, Deoxys uses Safeguard to protect everyone. Once the smoke clears and things calm down, Deoxys says goodbye to Max and flies off to explore, now knowing that there are many Pokémon in the world and it’s no longer alone. 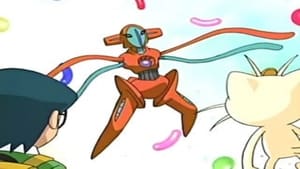