May and Drew are in a battle to reach the final four of the Grand Festival, and both Coordinators have some powerful combinations up their sleeve. May even picked up a few tricks from watching Ash’s Battle Dome match against Tucker! Her Combusken and Squirtle give it their all against Drew’s Flygon and Absol, and nobody in the arena can even predict which way things are going to go.

Once Flygon and Squirtle are knocked out, that’s when things really get exciting. Absol’s Water Pulse is bad news for a Fire-type like Combusken, but Combusken hangs in there and even comes up with an unexpected move, Overheat! Absol uses Water Pulse again but Combusken’s Overheat protects it in the nick of time, and the clock runs out on the battle. It’s up to the judges to decide the winner: May!

Elsewhere, Ash faces a battle of his own as he tries to catch the mischievous Aipom for once and for all. With Pikachu’s help, he catches the Pokémon for his team and goes to watch May battle Solidad in the semifinals. Solidad knows exactly how to counter May’s powerful battling style, and it’s Solidad who goes on to win the Grand Festival. May is disappointed, but her friends cheer her up. Now it’s off to the Battle Pyramid for Ash’s rematch with Brandon! 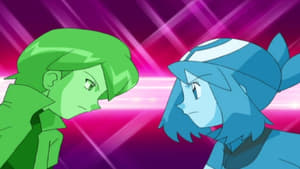