When Ash’s new Aipom plays another prank on him, it leads them both to a village that’s preparing to select this year’s King. Whoever manages to hang onto the ritual crown until sunset will be King of the village for a year! Ash and Brock meet Hank, who wants to be King, and Brock wants to be King too—King of the village’s lovely girls. But as Brock and the villagers race for the crown, Aipom runs away with it and tries it on for size. Once it puts on the crown, it can’t get it off again!

Hank and his Nosepass help Ash find Aipom, but Ash can’t get the crown off Aipom’s head either. Team Rocket then breaks up the reunion in order to seize the crown, using a flock of robot Fearow that are too much for our heroes to handle. So Hank has the idea of using Aipom’s Double Team to confuse Team Rocket, and Nosepass’s Thunder Wave to disrupt Team Rocket’s robot remote.

This lets our heroes send Team Rocket packing, but the crown is still stuck on Aipom’s head until Hank has another bright idea: feed Aipom a sour Belue Berry. Aipom reacts so strongly that Hank is able to pull the crown off, just as the sun sets and the rest of the villagers arrive. Hank is now the King, and he’s sure to be a good one! But if Ash wants to be the champion of the Battle Frontier, he still has to battle Brandon again. Our heroes’ trip to Fennel Valley continues! 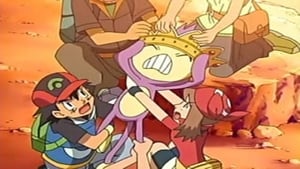