All That Glitters is Not Golden!

Ash and May spot an amazing golden Sudowoodo at the edge of a lake, but it knocks Ash’s Poké Ball away when he tries to catch it. Brock and the others don’t believe it, until they reach the next town and find a saloon full of locals looking for the golden Sudowoodo. They also meet Keenan, the golden Sudowoodo’s Trainer, who can’t explain why it’s golden or why it ran away from him. Our heroes happily decide to help Keenan find Sudowoodo, yet Keenan doesn’t seem to want the help.

Team Rocket is already on the hunt, and they catch the Sudowoodo at the lake. Ash stops them just in time, but Sudowoodo won’t even return to its Poké Ball and runs off again. Keenan finally explains why: he experimented on it to help it overcome its dislike of water, and that’s how it became golden. He can turn it back to normal if he can get it back home—easier said than done after Sudowoodo wanders into town and ends up chased by a gold-hunting mob!

Team Rocket shows up with the Bonsai Boy robot and tries to grab Sudowoodo for themselves. Keenan throws himself in front of the robot to protect Sudowoodo, who realizes Keenan never meant it any harm. Sudowoodo uses Brick Break to wreck the robot, and Pikachu takes care of Team Rocket. After Keenan turns Sudowoodo back to normal, the treasure hunters don’t even notice it since it’s no longer golden. With another good deed done, our heroes continue on their way! 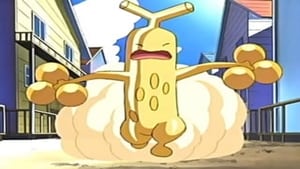