May is feeling the pressure at the Mulberry City Pokémon Contest, her last chance to get a fifth ribbon before the Grand Festival. To make things worse, Harley shows up! He has his ribbons already so he doesn’t have to compete. But Jessie plans to enter in her Jessebella disguise, so when Harley spots Team Rocket, he offers to loan them his Cacturne and Banette to use against May in the Contest.

The Contest begins, and Jessie does great with Cacturne. May and Combusken then take the stage, but unseen by anyone, Harley’s Ariados secretly trips up their grand entrance with its webs. Pikachu and Ash sense something’s afoot and head to the stage rafters, where they find James, Meowth, and Ariados. Meanwhile, Combusken’s Fire Spin display sets Ariados’ webs on fire and soon, with Pikachu’s help, Team Rocket’s plans are up in smoke! May makes a quick recovery and her performance has Harley steaming.

With that round over, Jessie and May advance to the second round. Harley is furious at Team Rocket for messing up the plan, but he’s not done messing with May yet. What underhanded tricks will he and Team Rocket come up with in the next round of the Contest…? 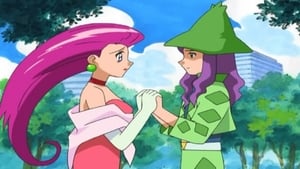