May is about to enter her next Contest on Chrysanthemum Island. Drew is there too, but not only is he not competing, he didn’t send her the mysterious note she received in Wisteria Town. During a practice battle between Munchlax and Combusken, May meets Brianna, the real sender of the note. Though she rooted for May in Wisteria Town, she’s really a huge Drew fan. May introduces her to Drew, which only makes Brianna determined to beat May and earn Drew’s respect.

The Contest begins! Jessie teams up with James’ Mime Jr. to perform a hula dance, May and Munchlax take the stage with a risky use of Metronome, and Brianna and her Surskit puts on an amazing ice show. All three will move on, but before the second round starts, Brianna wants to know if May likes Drew! Well, May’s not so sure about that. Jessie battles May in the second round, and James is horrified to watch Combusken defeat Mime Jr. with a mighty Sky Uppercut.

Now it’s Brianna and May in the final round, and Brianna’s brought her Vibrava. Vibrava comes on strong, using Sand Tomb to trap Combusken. All looks lost but Combusken learns Mega Kick, just in time to free itself and then knock Vibrava out! Afterward, as Brianna congratulates May, Drew compliments Brianna and sends her into a swoon. May is sure to see Drew and his smooth moves again, but first, it’s on to the Battle Palace! 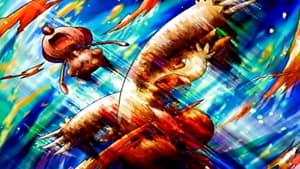