The kids travel to Wales Island, where both Ash and May have plans to train. May is thrilled when her Bulbasaur learns a new attack—Petal Dance. She shows it off to the others by having Bulbasaur blast through an ocean wave.

Max is gathering twigs in the forest when he is surprised by a Cradily. He tells the others but they don’t believe him, because Cradily are extinct. Max goes searching by himself, and eventually finds a lab full of Lileep.

Ash and the others eventually run into the Cradily, along with a scientist named Annie. She takes them back to the lab, where they are reunited with Max. There, Professor Proctor and Annie explain to the kids that all of the Pokémon there were cloned from fossils. Someday Professor Proctor hopes to make the island a fossil Pokémon amusement park.

One of the Anorith at the lab is about to evolve, so they bring it out and watch it become an Armaldo. Team Rocket shows up, and grabs the newly-evolved Armaldo in a net. It blasts them away on its own, but freaks out and starts trashing the lab, running off.

The kids try to corral it with their Pokémon, but Armaldo won’t be beaten. It heads to the tip of the island to find some fruit that it can eat. There, Team Rocket appears in a giant tank and grabs it again. It can’t break out, and none of the other Pokémon’s attacks affect the tank. May has her Bulbasaur use Petal Dance on the cliff above the tank which landslides, causing the tank to roll over. Armaldo breaks out, and Bulbasaur and Pikachu destroy the tank, sending Team Rocket blasting away. Armaldo finally reaches the berries, while everyone enjoys the sunset. 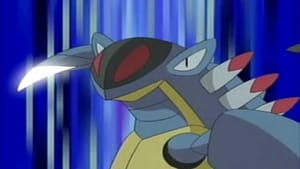