A Hurdle for Squirtle

The contest in Saffron City is about to begin! Harley ends up apologizing to May, but it rings hollow given his history of hating May. He goes first, and really impresses the crowd with his Cacturne’s combination of Cotton Spore and Needle Arm. A disguised Jessie comes up to the stage, impressing and horrifying the crowd when she embraces James’ Cacnea, followed by a firework-laden Pin Missile. May brings Combusken up, performing a great combination of Fire Spin and Sky Uppercut. All three of them make it to the next round.

Jessie and Harley are opponents next, and Jessie’s strategy is to send in Wobbuffet knowing that its defensive moves could knock out Harley’s Ariados. Harley is quite aware of this, and orders his Pokémon to do nothing. Frustrated and annoyed, Lillian issues them yellow cards, knocking down their points. Harley finally strikes, using String Shot to tie up Wobbuffet and move it like a helpless puppet. Eventually Wobbuffet is thrown in the air and knocked out of battle.

May makes through her next battle fine, and faces Harley in the finals. May has elected to use Squirtle, and the little Pokémon has a rough start, especially when it uses an Ice Beam that is too strong for it! Harley tries String Shot again, stringing up Squirtle near the ceiling. Ariados then uses Spider Web to cover the entire stage. May orders Squirtle to use Ice Beam again, which frees it from the Spider Web and freezes the stage—and Ariados! With the Bug-and-Poison-type out of the way, May wins the Saffron Ribbon. May is thrilled, and Ash is hyped for his next Frontier battle. 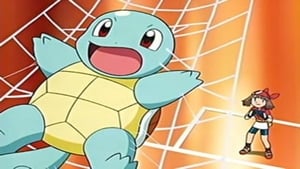