The Grand Festival is underway in Slateport. Harley asks May if they can train together for the main competition, and May agrees. She’s not the only one training; Ash is also training Snorunt, but its Ice Beam hits a Pokémon coordinator named Anthony. Anthony was planning to compete in the Grand Festival with his Swalot… until three people stole his ribbons!

The first round of the main competition begins with single Pokémon performances. Harley shows off his scary Banette as Jessie prepares to take the stage—as Anthony! She took his ribbons and disguised herself as him, but Officer Jenny, Ash, and the real Anthony are all waiting for her. Before she can get in a fight, James and Meowth exercise the better part of valor and drag her away.

Now it’s May’s turn. Following Harley’s advice, she has Skitty use Assist over and over, until Skitty performs a Petal Dance and confuses itself! Harley is delighted; Drew, who overhears him, is not. May orders Skitty to Double Slap itself back to normal and finish off with an impressive Blizzard. She apologizes to Harley for going against his advice, but Drew reveals that Harley was only pretending to be her friend to sabotage her.

Drew and his Masquerain receive perfect scores for their performance, as does Robert and his Milotic. May just makes it into the second round, where she’ll face Harley in a double-battle! 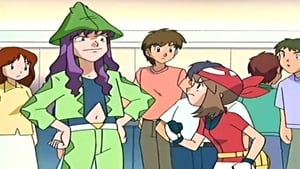