Hail to the Chef!

Chasing after a hungry Munchlax, Ash and his friends end up at Rhonda’s, a restaurant run by a girl named Rhonda with Mr. Mime as its head chef. Team Rocket stumbles across another restaurant, Rhoda’s, run by a girl named Rhoda with Sneasel as its head chef. Meowth quickly takes a disliking to Sneasel, but Jessie and James want it for Team Rocket.

Back at Rhonda’s, Mr. Mime puts on a fantastic show for Ash and company, but the food is terrible. Over at Rhoda’s, Sneasel’s food looks terrible, but it tastes fantastic—except for Meowth’s, because Sneasel purposely made him a horrible meal. The two start to fight, breaking through the restaurant wall and right into Rhonda’s. Rhonda and Rhoda are actually twin sisters who split up the family restaurant; Rhoda accuses Rhonda, and they challenge each other to see who deserves to run the place.

Team Rocket coaches Sneasel while Brock advises Mr. Mime, and after a night’s practice it’s time to allez cuisine! Mr. Mime’s presentation is great, but now Sneasel also puts on a show. It looks like a close battle until Team Rocket steals the chefs and Pikachu too! Team Rocket hops in their balloon to make a getaway, but Rhonda tells Mr. Mime to use Trick and Psychic. This frees all three Pokémon, who head home and send Team Rocket packing along the way.

Impressed, Rhoda leaves the restaurant to Rhonda. But Rhonda makes Rhoda co-manager and Sneasel the head chef; with everyone working together, the restaurant is now better than ever! And after a wonderful meal, Ash and his friends can happily continue on their way. 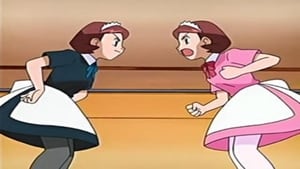