The second round of the Pacifidlog Contest begins! Erica and her Jynx face a suspiciously familiar team—the Jester and Meowth. Meowth is afraid of Jynx, so the Jester orders him to use Transform. Meowth disguises himself as a Sunflora, then a Kirlia, and finally a Wailord, but the scam is uncovered. The Jester reveals herself as Jessie and Team Rocket tries to snatch Jynx, but its Hyper Beam puts a stop to that!

Erica jealously watches Joshua and Houndoom battle May and Skitty. The winner depends on which attack is stronger: Houndoom’s Flamethrower or Skitty’s Blizzard! They’re well-matched, but Houndoom finally stumbles. With time up, May is ahead of Joshua in the points.

On the final contest stage, Erica realizes May and Joshua both gave it their best. That matters more than petty jealousy, so Erica apologizes and shakes May’s hand. Once their battle starts, Skitty has a hard time with Jynx’s attacks so May decides to use Assist again and again, with mixed results… and she’s running out of time! But Skitty’s Assist finally comes up with Fire Spin, an attack that Jynx is weak against, giving May the advantage she needs to win!

Afterward, Erica and Joshua promise to keep training separately so they can become great rivals as well as great partners. May and her friends say goodbye, then it’s off to the Grand Festival and the Hoenn League! 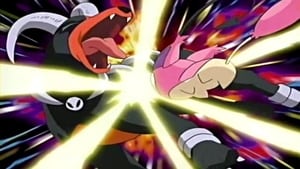