Choose It or Lose It!

Morrison and Ash are battling each other in the Hoenn League, and Morrison is so upset he can’t bring himself to choose his next Pokémon after his Girafarig is knocked out! He’s almost disqualified before he decides to send Growlithe out against Ash’s Corphish. But Morrison doesn’t have Growlithe attack, and his Pokémon is quickly knocked out. Ash angrily demands to know why Morrison isn’t fighting, which makes Morrison realize his Pokémon are counting on him to give it his best, too.

He rallies and brings out Swampert—both it and Corphish unleash their strongest attacks, resulting in a double KO! It’s time for a battlefield change and Morrison apologizes to Ash. Then, Pikachu and Morrison’s Steelix take to the grass battlefield. Another head-to-head battle results in Pikachu out of the match, and Torkoal is defeated as well! It’s up to Grovyle to beat Steelix, but Morrison’s agile Gligar gets the better of their aerial battle. Gligar and Ash’s Swellow have another double KO, so this match will be decided by Glalie and Metang. Some clever strategy wins the day for Ash, who becomes one of only 8 semifinalists!

Elsewhere, Team Rocket’s work as snack sellers pays off when their boss takes them to the all-you-can-eat buffet as a reward. But is he making a big mistake in trusting them? And Ash and Tyson will face each other in the semifinals, in a match that begins with a real bang! 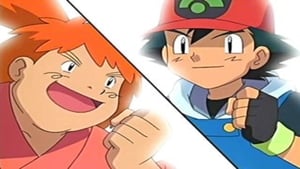