The Hoenn League has ended and our friends must go their separate ways. Tyson and Morrison are off to new adventures; May and Max return to Petalburg while Ash and Brock head back to Kanto. Even Team Rocket goes back to headquarters and reports to a thoroughly unimpressed Giovanni. Butch and Cassidy show off their cool new jetpacks, so Team Rocket demands they get something cool too—and end up with pogo sticks.

Ash is now alone, Brock having headed home to Pewter City. In Viridian City, Ash encounters Scott, a flashy fellow who wants to talk about the Battle Frontier. But first Ash ends up challenging the new Viridian Gym Leader, a woman named Agatha. With typical confidence, Ash sends Pikachu to battle Agatha’s Gengar and forgets that as a Ghost-type Pokémon, Pikachu won’t be able to hit it with normal attacks.

Although Ash quickly adjusts his strategy and Pikachu does its best, it just can’t beat Gengar. Still, Agatha is impressed that Ash at least showed some spirit. It’s now that Ash learns Agatha is also one of the Elite Four, so it’s great that Pikachu managed to last that long in the first place! Scott encourages Ash to try for the Battle Frontier, a series of seven challenges, but they’re briefly interrupted by Team Rocket’s latest short-lived Pikachu-snatching attempt.

Once Ash finally makes it back home, he finds Misty and her new Azurill waiting for him—and Professor Birch and Max show up as well! A memorable get-together is in the works… 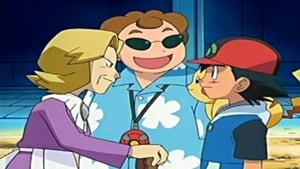