The kids are floating on logs at sea when a red submarine appears beneath them, belonging to Team Magma. At the floating Magma base, the kids are taken into custody. Team Magma Leader Maxie explains to them about how he has the Blue Orb in his possession, allowing him to control Groudon. Unfortunately, the Legendary Pokémon they currently have in their possession is Kyogre.

A disguised Shelly of Team Aqua sneaks away and unlocks Kyogre, setting off an alarm. Kyogre awakens and busts out of the floating base, causing it to begin sinking. In the chaos, the kids try to grab the orb, and Pikachu accidentally absorbs it and goes berserk.

Ash is separated from his friends and attacked by a Team Magma member. He meets what appears to be another member of Team Magma—but it’s really Lance of the Elite Four in disguise! Lance has also sent his red Gyarados to go help Ash’s friends.

Both Teams Magma and Aqua end up on Monsu Island, along with Team Rocket, who wants to steal both Legendary Pokémon. Of course, it’s no good, as Kyogre is under the control of the Red Orb, which is currently in Team Aqua’s possession… 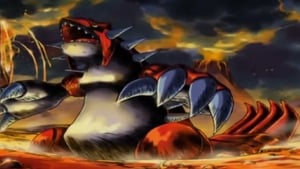