Ash is now three months away from Ever Grande City and the Hoenn League, while May is gearing up for her next contest in. But after they stop for a rest, two of May’s Poké Balls suddenly vanish! All evidence points to a Linoone as the culprit. Ash tracks it to a house and meets Kimmy and his family. Kimmy is a boy whose Linoone, Token, is obsessed with collecting round objects—even if they’re not his! Kimmy and his parents help search, but there’s no sign of May’s Poké Balls until Token appears with the Poké Balls still in his mouth.

Team Rocket, impressed by Token’s Pickup ability, capture Token and fly off in their balloon. Kimmy tries to stop them but falls and gets hurt, which startles Token into dropping the Poké Balls. Pikachu frees Token but Team Rocket simply grabs Pikachu instead and flees.

Token chases Team Rocket’s round balloon—it likes round objects because it used to play Fetch with Kimmy when it was still a Zigzagoon. James’ Cacnea tries to stop Token with Needle Arm, but this accidentally pops the balloon and lets Token rescue Pikachu. Team Rocket come back for more, so Token and Pikachu hit them with a double Thunderbolt and blast them off at last! Kimmy now understands that even though Token changed when it evolved, the two of them are still friends. 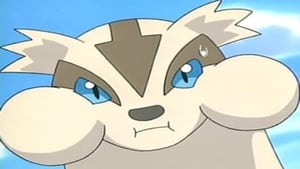