The kids are now headed to Slateport City. But while eating berries, Ash bites into a Tamato Berry and burns his mouth!

They reach a Pokémon Center and Ash goes off to practice Ice Beam with Snorunt, while May goes off to make PokéBlock. In the garden, Team Rocket is trimming hedges to earn money, but they’re stepped on by an unrepentant Munchlax. They notice the Berry Blenders and get an idea.

Brock and Max watch people make PokéBlock. May comes in with her killer top-secret recipe for PokéBlock: May’s Purple Surprise! But it tastes terrible to Brock and Max. The Pokémon also hate it. But Munchlax wanders in and loves it!

Team Rocket shows up dressed as professional PokéBlock tasters who claim to know all the secrets. Meowth and Wobbuffet then steal the PokéBlock while everyone’s distracted. Oddly enough, Jessie also likes May’s PokéBlock. But then the kids notice all of the PokéBlocks are missing and they blame it on Munchlax. It goes out into the garden and eats all the berries, but May stands up for it to the other kids.

She tries to capture Munchlax but nothing works. James bites into a Tamato Berry and runs away in pain; the kids see him and realize he must be a fake. Backed into a corner, Team Rocket grabs Pikachu. Munchlax jumps into the Team Rocket balloon to eat all the PokéBlock. With Snorunt’s help, the kids defeat the thieves.

May tries to catch Munchlax; she throws the ball but Munchlax eats it. But it works, and she now has a new friend! 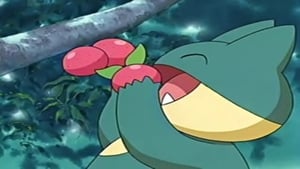