It's Still Rocket Roll to Me!

Ash and friends finally arrive in Mossdeep City and head straight to the Pokémon Gym—only to find it empty because everyone in town is at the Space Center for the shuttle launch, including the Gym Leader.

At the Space Center, the kids begin snooping around, and Ash stumbles upon a Pokémon battle between two siblings named Tate and Liza, who are there because their father is piloting the shuttle. They are the twin Gym Leaders of Mossdeep, who promise to battle Ash after the shuttle launch. For now, they take Ash and friends on a tour of the center. Corphish wanders off when Ash isn’t looking, sneaking on board the shuttle.

Team Rocket breaks into the shuttle and heads for the cockpit, only to encounter Tate and Max! They tie the two boys up, and the shuttle takes off. Before they get very far, the shuttle is grabbed by the Baltoy that live in the Space Center. Corphish frees Max and Tate, and Tate’s Solrock takes out Team Rocket with Psychic.

Tate must now land the shuttle, and he and Max manage to get it safely to the ground. May and Liza attack Team Rocket when they emerge from the shuttle, and Pikachu sends them blasting off.

The shuttle is launched with Commander Jin at the controls, and then it’s time for a Gym battle! 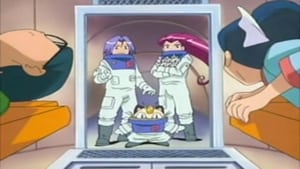