A Psyduck is frantically running from a Machop, Machoke, and Machamp when it hurls headlong into Ash and friends, on their way to the Pokémon Contest in Saffron City. Ash sends out Phanpy, who drives off the three Superpower Pokémon. Brock feeds the Psyduck, who makes fast friends with Phanpy and Pikachu.

Meanwhile, the Superpower Pokémon trio returns to their Trainer, a rich girl named Emily who orders them not to return unless they have Psyduck in tow. They dutifully head out again.

The kids and Psyduck walk along until they reach a hill where a disguised Team Rocket coerces them into trying out “grass-sledding.” But as they’re coasting down the grassy hill, Jessie activates a trap that sends the kids barreling around like pinballs and then Meowth catches Psyduck and Phanpy in a net. Team Rocket begins to escape with the two Pokémon using their balloon, but Machop, Machoke, and Machamp show up just in time to pull them back down. Team Rocket is sent blasting off, and Emily arrives to take her Psyduck home.

Back at Emily’s mansion, everyone notices that despite the posh surroundings, Psyduck is not happy there. Ash and May have a practice battle on the grounds, and they find out that Emily never lets Psyduck battle. Brock speculates that it’s lonely. Team Rocket shows up again, and this time Psyduck eagerly steps up to the plate to drive them off. Emily doesn’t know how to battle, so Max gives her some advice. Psyduck holds its own against Cacnea, Seviper, and Meowth, just before Pikachu sends the thieves off with Thunderbolt.

Emily realizes that she needs to bond with her Pokémon more, and considers going on her own Pokémon journey as the kids resume their own travels. 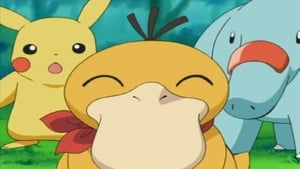