We rejoin the action in the middle of Ash’s match against Juan, the Sootopolis Gym Leader. Ash’s Grovyle has been confused by Luvdisc’s Sweet Kiss and before it can snap out of it, Luvdisc knocks it out with Water Gun! Corphish must step up to take Grovyle’s place.

Team Rocket has dressed James up as Juan to attract an audience for their Water Illusion show, but back at the Gym, it’s a tense back and forth as Corphish confronts Luvdisc. Luvdisc is fast, and when Corphish’s attack creates a rain-like shower of water, its Swift Swim makes it even faster! But once that effect dissipates, Corphish wins the round, only to be defeated by Juan’s next Pokémon, Whiscash.

With no Water Pokémon and no talent, Team Rocket’s Water Illusion is a very poor Water Pokémon talent show, but they’ve got a Plan B: sell merchandise and autographs! Naturally Team Rocket tries to swindle all their customers, but it turns out that Juan’s fans include some tough Water Pokémon Trainers—never mess with a lady and her Blastoise! Team Rocket’s plan is now officially all wet.

After Swellow defeats Whiscash, Juan sends out his secret weapon: Milotic! Milotic takes down Swellow and then faces off with Pikachu. Milotic’s Restore ability makes this a tough battle, but in the end Pikachu takes advantage of the water-filled battle stage to score a victory. Ash has earned his eighth badge and it’s time to prepare for the Hoenn League! 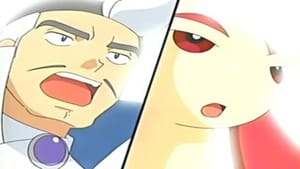